The King's Gambit is a popular romantic-style gambit beginning 1.e4 e5 2.f4, in which White aims to displace Black's strong-point on e5, build up a strong centre with d2-d4, and attack Black down the f-file. 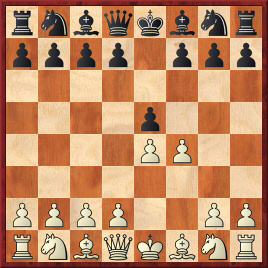 The King's Gambit is especially popular at club level, as it often leads to unusual positions, where White sometimes sacrifices further material (most often the g1-knight) and goes on king walks, but relies upon control of the centre and attacking chances down the f-file to provide compensation.  One attraction of the King's Gambit is that even in positions where Black gets the upper hand, or returns the sacrificed pawn and gets equality, White often retains some long-term attacking chances against the black king.  If Black wishes to keep the extra pawn on f4, this often requires playing weakening moves such as ...g7-g5, which leaves the light squares on the black kingside weak.

In some of the wilder lines White is prepared to sacrifice the knight on g1, or throw in a Bc4xf7 sacrifice, or allow the white king to run around in the centre.   The King's Gambit appears to be reasonably sound, with 2...exf4 3.Nf3 and 3.Bc4 offering equal chances with best play, while the Mason Gambit 3.Nc3 is a less sound but interesting alternative, inviting 3...Qh4+ 4.Ke2.

As with many such gambits, though, Black does have ways to return the pawn and reach equality.  Against 2...exf4 3.Nf3, 3...d5 (the Modern Defence) is pretty reliable, while the typical equalising line against 3.Bc4 is 3...Nf6 intending 4.Nc3 c6 (3...d5 can be met by 4.Bxd5, after which Black has a harder time equalising).  Black may also be able to reach an equal game with best play in the declined variations with 2...Bc5.   The Falkbeer Counter-Gambit with 2...d5 is interesting but White has fair chances of getting an edge against it unless Black heads for transposition into Modern Defence lines with 3.exd5 exf4.

Black's most theoretically critical responses are to try to hold the gambit pawn with 2...exf4 3.Nf3 g5, immediately defending the extra pawn, or 3.Bc4 Nc6 (here 3...g5 is less effective because after 4.h4, 4...g4 does not hit a knight on f3).  3...Nc6 is essentially a waiting move which intends to meet 4.Nf3 with 4...g5.  This approach does, however, tend to give White the kind of complications that White is typically seeking in this gambit, and so the choice is mostly a matter of taste.

The coverage is divided up as follows: