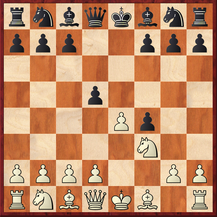 ​With 3...d5, Black aims to return the gambit pawn and concentrate on development.  Unlike many other such declined variations, the Modern Defence tends to lead to a relatively dynamic equality, rather than sterility, and so is a good option for those who would rather avoid the wilder lines of the King's Gambit Accepted but still retain reasonable winning chances.

I don't think it is a strong reason for White to give up the King's Gambit, because there is still a fair amount of scope for White to head for unbalanced play with attacking chances, but Black's attacking chances are often every bit as good as White's in this variation.  On the other hand, it is worth noting that, unlike in many such gambits, Black actually scores higher in practice by holding onto the extra pawn with 3...g5 than by giving it back with 3...d5.

The move order 2...d5 3.exd5 exf4 is a more forcing way of reaching the Modern Defence 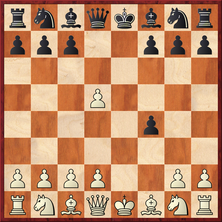 2...d5 is often used as a gambit, meeting 3.exd5 with 3...e4 (the Falkbeer Counter-Gambit) or 3...c6 (the Nimzowitsch Counter-Gambit), but Black can also aim for transposition into the Modern Defence with 3...exf4 (see diagram)  This may well be a more forcing way of reaching the Modern Defence, as it avoids the line 2...exf4 3.Bc4 d5 4.Bxd5, and in the meantime Black is threatening a disruptive queen check at h4. 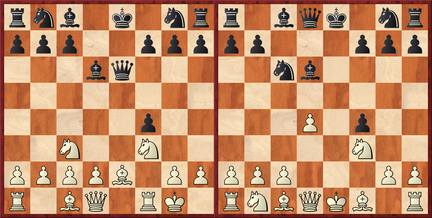 After 4.exd5, if Black continues with 4...Qxd5 then White has good chances of getting the advantage with 5.Nc3 harassing the black queen, and 5.d4 is also quite good, putting a pawn in the centre before chasing the black queen.  For example, 5.Nc3 Qe6+ 6.Be2 Bd6 7.0-0 (see diagram on the left), where White has a large lead in development in return for the pawn.

However, 4...c6 is also playable, aiming to generate active piece play in return for having a compromised pawn structure, the main line then goes 5.d4 Bd6 6.dxc6 Nxc6 ​(see right hand diagram).  Black has scored well in this line, although Black must play actively to avoid allowing f4 to drop off.  The chances are roughly equal.  One interesting example of this line was Halvard-Daniel, Aarhus Chess House 2012. 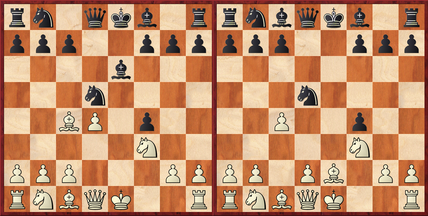 After the normal 4.exd5 Nf6, 5.d4 is not played very often because it allows Black to get in 5...Nxd5, recapturing the pawn and defending the pawn on f4.   White has difficulties getting the pawn back in this line without making concessions, as the attempt to kick the knight away with 6.c4 is well met by the awkward check 6...Bb4+.

Thus White's best is probably to put pressure on the knight on d5 with 6.Bc4, but then 6...Be6 (left hand diagram) keeps it pretty solid for Black.  If 7.Bxd5, 7...Qxd5! is strong because White cannot play 8.Bxf4 due to 8...Qe4+ and 9...Qxf4, and if 8.Nc3 Black can pin the knight with 8...Bb4.  With best play White can regain the pawn eventually, but this line gives Black the positional advantage of two bishops vs. bishop and knight in an open position.

5.Be2 is more interesting, and has been tried by Hikaru Nakamura.  White is happy to let Black hold onto the extra pawn on f4 and strive for compensation, meeting 5...Nxd5 with 6.c4 (right hand diagram).  However, I don't particularly trust this line for White either.  Most often Black plays 6...Nf6 or 6...Ne7, with the latter allowing Black to play ...Ne7-g6 to add extra protection to the pawn on f4.  John Shaw in his book on the King's Gambit was unconvinced by White's compensation in these lines, while Stockfish likes the rarely tried 6...Nb4!?, with the idea of 7...Bf5 threatening 8...Nc2.  There is only one relatively high-level example that I can find with this, Carnstam-Werner, corr. 1988, and it is unconvincing for White. 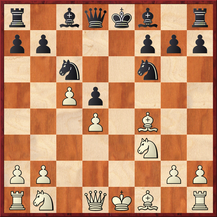 5.c4, defending the d5-pawn, appears to lead to dynamically equal play and is thus a reasonable option for White.  Black normally responds with 5...c6 6.d4 cxd5 7.c5!? Nc6, and now 8.Bxf4 (diagram) promises equal chances for both sides.   ​This line is not generally very popular, but it has been tried by Magnus Carlsen.  In Carlsen-Chadaev, blitz Wch 2012, Carlsen actually deviated with 8.Bb5, which may be dubious as Black may be able to hold onto the extra pawn following the untested 8...Qe7+, but the game continued with the compliant 8...Be7.  Black is left with an isolated pawn on d5 and will need to play actively in order to prevent it from becoming a weakness, striving to keep pieces on the board.  The line up to move 8 is not forced, and in particular 7...b6 looks like an interesting alternative, encouraging the potentially weakening 8.b4. 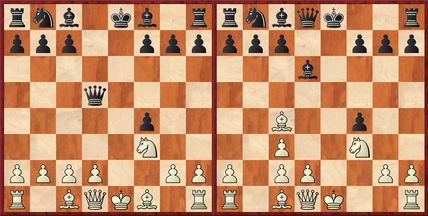 White generally intends to bring the black queen out into the open with 5...Nxd5 6.Nxd5 Qxd5 (left diagram).  The main problem for White is 7.d4 (7.c4?! Qa5 pins the d2-pawn to the white king, and if 8.Be2, 8...Bc5 makes it difficult for White to castle) 7...Be7, which leaves Black with at least equality and maybe a little more, the key idea being 8.c4 Qe4+.
​
If 6.Bc4 then Black has 6...Nxc3 7.dxc3 Bd6 (right diagram), and Black generally gets the upper hand, as White's pawn structure is compromised and Black can make it difficult for White to regain the pawn on f4.  Some of the sidelines are quite attractive for White, but objectively 5.Nc3 is one of White's weaker options. 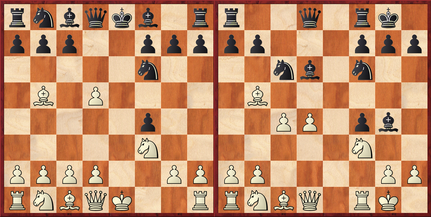 The position is gifven in the left diagram.  Causing some disruption in the black queenside before Black can get around to taking on d5.  Black now has a choice as to how to parry the check:

B) 5...Nbd7!? ​has been tried a few times at grandmaster level.  White's main choices are again 6.c4 and 6.0-0.
6.c4 has the disadvantage that Black can throw in 6...Qe7+, and if 7.Qe2 Qxe2+ 8.Kxe2 a6, as played in Nakamura-Ivanov, Ledyard 2009, whereupon the lower-rated player easily held Nakamura to a draw, though I think at club level the queenless middlegame nonetheless offers some interesting play.
6.0-0 gives White an initiative following 6...Nxd5 7.Re1+, so perhaps Black should rather focus on development with 6...Be7 intending 7...0-0.  It is less clear if White can get an advantage with best play against 5...Nbd7, despite the move awkwardly blocking in the bishop on c8.  The knight on d7 can create problems for White by coming out to b6 or c5.

C) 5...c6 is the main line and the response that scores best for Black (a 54% plus score at the time of writing in the Chesslive.de database).  As the bishop on b5 is attacked, 6.dxc6 is virtually forced, and then the best reply is 6...Nxc6 (6...dxc6 makes less sense, as it compromises Black's pawn structure and takes the c6-square away from the knight on b8, and 7.Bc4 is a good reply).  Then play most often continues 7.d4 Bd6 8.0-0 0-0 9.c4 Bg4 (right hand diagram) where White has the better pawn structure, but Black has a lead in development.  Objectively it's probably equal, but in practice Black is scoring over 60%.

Instead of 9.c4, John Shaw in his King's Gambit book recommended 9.Nbd2 with the idea of instead playing c2-c3 to reinforce d4.  Nonetheless, I can't say that I am enthusiastic about White's chances. 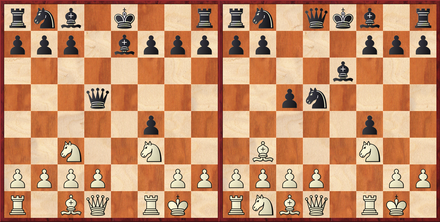 This is White's highest scoring reply (54% in the Chesslive.de database at the time of writing).  White concentrates on quick development, envisaging 5...Nxd5 6.0-0 (instead after 6.Bxd5 Qxd5 7.Nc3 Qf5, White will struggle to demonstrate sufficient piece activity to compensate for conceding the bishop-pair).  After 6.0-0 Black has two main options:

The Modern Defence is pretty strong, and White's main "go-to" response to generate attacking chances against it, 5.Bc4, appears to be unpromising if Black finds a few accurate moves in response, and White is also in danger of being worse after 5.d4, 5.Be2 and 5.Nc3.  I personally find 5.c4 with the follow-up 5...c6 6.d4 cxd5 7.c5!?, as played by Magnus Carlsen, to be the most interesting.  5.Bb5+ also looks good enough to give White an objectively equal game, although Black has a plus score in practice with the response 5...c6 6.dxc6 Nxc6.

​Page last updated 19 October 2019.  The above reflects my most up-to-date views on the Modern Defence.  Analysis from a previous update can be found below:
Discussion and practical examples- the Modern Defence