From's Gambit is a variation of the Bird's Opening (1.f4) where Black replies with 1...e5. 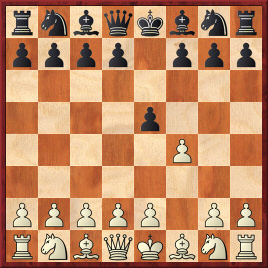 Black aims to take advantage of the fact that 1.f4 weakens the white kingside, and to generate attacking chances against the white king.  Theoretically the From Gambit is reasonably sound, though White is slightly better with best play.

White does not have to play 2.fxe5, but none of the alternatives are theoretically challenging.  White's best practical alternative is probably the transposition to the King's Gambit with 2.e4, especially as many players who meet 1.f4 with 1...e5 do not necessarily meet 1.e4 with 1...e5.  Other moves can generally be met with 2...exf4 and White ends up in lines that are inferior relatives of the King's Gambit.

The continuation 3.exd6 Bxd6 is not forced, and White can try to decline the gambit and concentrate on development.  3.d4 dxe5 and 3.Nc3 dxe5 both lead to approximate equality.  White's slight development advantage in those lines is offset by the weakened white kingside. The main alternative is 3.Nf3 which can transpose into accepted lines of the gambit after 3...dxe5 4.Nxe5 Bd6 5.Nf3, but White can try to deviate with 4.Nc3 or 4.e4, which lead to a similar result to the 3.e4 and 3.Nc3 lines and often transpose into them.

4...g5 is an aggressive follow-up which intends to create mayhem in White's kingside with ...g5-g4.  In response, 5.c3!? was suggested in Kaissiber 36, which is quite challenging, preparing to attack Black's queenside with 5...g4 6.Qa4+ Nc6 7.Nd4, though the complications following 7...Qh4+ give Black decent counterplay.
5.g3 is the main line, which should be slightly better for White with best play, but leads to complications where Black can repeatedly generate threats.  The most usual continuation is 5...g4 6.Nh4 Ne7 7.d4 Ng6 8.Nxg6 hxg6 9.Qd3.
5.d4 normally leads to a quick queen trade but misplaces White's king, which enables Black to get fair compensation for the pawn.  It appears that 5...g4 6.Ne5 Qe7 and 6...Qf6 are insufficient, so Black normally continues 6...Bxe5 7.dxe5 Qxd1+ 8.Kxd1.

This is Black's most solid way of following up the gambit, concentrating on maintaining a development advantage.  The line with 5.d4 Ng4 leads to considerable complications which should suit Black, but Kaissiber 36 made a strong case for 5.Nc3, which should be slightly better for White.  Black can stir up complications here, too, with 5...Nc6 6.d4 Ng4 intending 7.g3 h5, while 6...0-0, intending Re8 and central pressure, is the more conservative option.