Chess Gambits- Harking back to the 19th century!
Göring Gambit​ 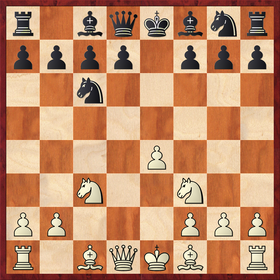 White can of course recapture with 4.Nxd4, the Scotch Game, but in the Göring Gambit White instead offers the d-pawn as a gambit - this opening is essentially a Danish Gambit (1.e4 e5 2.d4 exd4 3.c3) with Nf3 and ...Nc6 inserted.  After 4...dxc3 White can settle for sacrificing one pawn with 5.Nxc3, or sacrifice a second pawn at b2 with 5.Bc4, which is more dangerous but of more marginal soundness.

The idea is to open up lines for the white pieces and increase the white lead in development, which will typically be used as a basis for launching a quick attack on the black king.

The gambit was first played at high levels by Howard Staunton in the 1840s, but Carl Theodor Göring, who was the first player to introduce it into master play, got it named after him.  Although the Göring Gambit has never gained much popularity at the highest levels of play, some players rated in the 2300-2600 Elo bracket have used it frequently at some point, e.g. Jonathan Penrose, Ljubomir Ljubojević, Douglas Bryson, Igor Dolgov and Dimitrios Mastrovasilis.  There was a rare GM outing in the gambit in 2011, when Yu Yangyi used it successfully against Rimat Jumabayev.   Alexander Alekhine often played 1.e4 e5 2.d4 exd4 3.c3 dxc3 4.Nxc3 in casual games, which often transposed after a subsequent ...Nc6 and Nf3.

The most common objection to playing this gambit is that 4.c3 does not contribute directly to the development of white's pieces and so Black can equalise by declining the gambit and undermining White's e4-pawn, which is currently undefended.  4...d5 is the most reliable way of doing so, while 4...Nf6 is also quite good.  4...Nge7 intending 5...d5 is also tricky, but I think 5.Bc4 d5 6.exd5 Nxd5 7.0-0 gives White good chances of getting an advantage out of the opening, and "pushing past" with 4...d3 tends to consign Black to passive positions.

An interesting pronunciation quirk is that (in Britain and North America at least) this opening is most often pronounced in a way that rhymes with "boring", as if the name Göring didn't contain an umlaut.  I am guessing that this is probably to distance it from risk of being tarnished by association with the infamous Hermann Göring, who probably had nothing to do with this gambit.

After 2...Nc6 3.d4, however, Black has no good way to maintain the strong-point on e5.  3...d6 is well met by 4.dxe5, or 4.Bb5 (transposing into the Steinitz variation of the Ruy Lopez, which is quite passive for Black), or 4.Bc4 which tends to lead into the Hungarian Defence.

At move 3, 3...Nf6 transposes into the Old Petroff (here White can consider heading into the Urusov Gambit with 4.Bc4, which is actually how I have most commonly reached it in practice).  3...Bb4+ leaves both sides with nothing better than to head into one of the main accepted lines of the Göring with 4.c3 dxc3 5.Nxc3 Nc6 (transposing to 4...dxc3 5.Nxc3 Bb4).

John Watson's book review #62, Danish Dynamite
Mark Morss, Hard Chess, The Importance of the Open Games, the Goering Gambit
Gary Good, The Goring Gambit- A Return to the Romantic
(ChessCafe.com links have been removed because the site went behind a paywall).
A special thanks also goes to Mark Nieuweboer for contributing a large number of ideas.