Although the recapture on c3 is fully playable and most likely provides enough compensation for the pawn, more popular is the daring sacrifice of a second pawn with 5.Bc4, which is essentially a Danish Gambit with the moves Nf3 and ...Nc6 inserted.  While this may not necessarily objectively favour White, it is certainly to White's advantage in a practical sense, because the knight on c6 makes it hard for Black to get in ...d7-d5 effectively, since e4xd5 will hit Black's knight on c6 and open the e-file for White's king's rook.

Thus, theoretically critical is to accept the second pawn with 5...cxb2 6.Bxb2, but in practice it is hard to defend against White's accelerated initiative, and hence many players prefer 5...d6 (certainly, my results with Black after 5...d6 have been better than those after 5...cxb2, albeit mainly in casual games).

Black grabs at the bait on b2 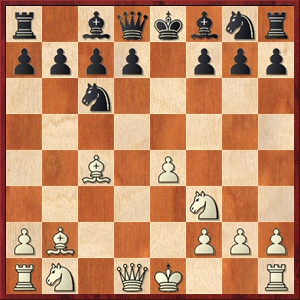 After Black takes on b2, Black has two ways to seriously test the soundness of White's double-pawn sacrifice.

The first of these, favoured by Mark Morss (who wrote the "Hard Chess" column back in 1999) is 6...Bb4+ 7.Nc3 Nf6, preparing rapid kingside castling and thus rendering attacks against f7 ineffective.  Therefore White chooses between Qc2 and 0-0-0, followed by pushing the kingside pawns forward, and a more positional approach with 0-0 followed by Nd5, aiming to cause disruption in the black kingside.  The queenside castling approaches are very dangerous for Black in practice, but objectively the kingside castling approaches are more likely to provide full compensation for two pawns.

The second is 6...d6, which leads to solid, albeit passive, positions for Black.  White can put pressure on f7 immediately with 7.Qb3, or defer it for a move by castling first, 7.0-0, with Qb3 to follow.  The two lines may well transpose to each other with best play after 7...Be6, since I think White gets ample compensation for two pawns after Black's other responses to 7.Qb3, and I think that in general 7.Qb3 gives Black more scope to go wrong early in the game.  An alternative approach for White is 7.Nc3 followed by Nd5, which is also dangerous for Black.  Theoretically, though, it is not clear if White can get full compensation for two pawns against all of Black's defences, regardless of which 7th move White chooses.